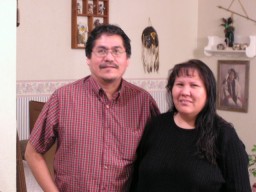 I attended boarding school on the reservation until 7th grade.  Went off the res, and completed my schooling.
Have a 2 year degree in electronics.  I started making these items, about 4 years ago, and source of 2nd income, and made it a hobby.
I am Navaho, from the Monument Valley area.  Born at home.
I know the life on the reservation, no running water, electricity, or any type of utility.
We do have running water now, and some utilities.  With the exception of cable.
I am the 4th in a family of 7 kids.  Two sister, and 4 brothers (two of which are not here any longer).
I am from the Red House clan. 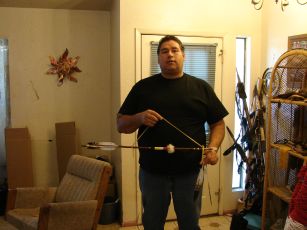 Lavern Little Hails from Rosebud South Dakota and grew up on the reservation there.
He has lived and been making art locally for over twenty years.
His Art has appeared in the Heard museum in Phoenix and his artwork has been used in several books on Sioux history, most recently his artwork appeared on the cover of “Dakota Dawn” by Gregory F. Michno.

He does Peace pipes, Ceremonial Attire,  Decorative Bow and Arrows,   Tomahawks, and other assorted pieces. 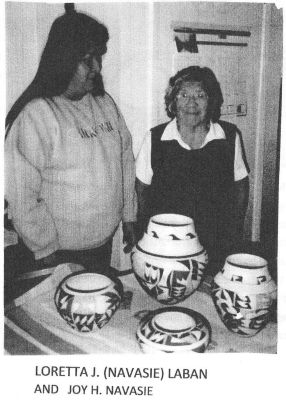 Loretta was born and raised in Keams Canyon Arizona on the Hopi reservation.  Loretta collects and processes her own clay,  She processes and draws her paints from local plants and clays.  Loretta uses the hand coiling method in forming and shaping her pots.  she uses all local materials in processing, finishing and polishing her pottery.   Loretta's specialty is "white" pottery so she applies a white "Slip".  After polishing her pottery, she hand draws traditional designs using the traditional paints.

Firing:  Loretta fires her pottery using the traditional kiln which requires patience and precision.  The right amount of sheep's dung is required to complete the firing and yet not burn the pottery.

Heritage:  Loretta is the daughter of th famous traditional potter "Frog Woman" Joy Hope Navasie.  Thru her mother, Loretta is of the Tewa people, Parrot Clan and hails from the village of Tewa, Hopi Indian reservation.  Loretta's Father is the late Perry Navasie a member of the Hopi Tribe and was from the village of Walpi, Hopi Indian Reservation.

The Frog Woman Hallmark:  When Loretta was a little girl, "Frog Woman" (Joy)  started teaching her the art of pottery making.  through her childhood, teenage and early adult years "frog woman" supervised and helped her.  When Loretta was in her mid adulthood, Frog Woman bequested upon her, the authority to use her hallmark "Frog Woman".  "Since I have taught you through all of these years, this art of pottery making, I have taught you all that I have learned from my Mother, the original "Frog Woman".  like my mother i authorize you to use my hallmark, the frog on your pottery.  this hallmark, the frog, was passed on down to me from my mother "Paquah" the original "Frog Woman"

Jimmy YellowHair
He created most of our Canvas paintings.  Jimmy is Navajo.  Working on BIO